Creating is always re-creating. Here’s how it’s looking over here.

This time last year, I was entering into the final rehearsals for “Unbound,” a collaboration between music coordinator and violinist Karen Harmon, videographer Nathan Harmon, and my company Tulsa Modern Movement. “Unbound,” which premiered at Living Arts of Tulsa, was to that point the biggest project I had ever choreographed on my own, and having such enthusiastic collaborators was critical to its completion (and of course to its inception). 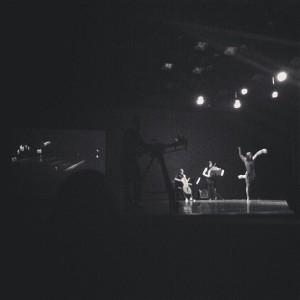 This past June, I had the chance to re-envision “Unbound” for a very different space: the gorgeous proscenium stage at Tulsa Ballet‘s Studio K. In this much larger space, Nathan’s role expanded as he and his fabulous cantilevered camera had more room to explore, and that new presence — plus his new projections in black and white, taking up one full half of the stage — raised new questions for us and for the audience about our intentions and our message in the piece. It was very gratifying to revisit a dance whose creation meant so much to me; even more gratifying to hear applause as the curtain opened on it on opening night, applause from people who’d seen it at Living Arts or who’d missed it and were getting another chance; and more gratifying still to hear that “Unbound” was selected to be performed at the National Performance Network annual conference, held in Tulsa this year, in November. This little project, hatched in the elementary school pick-up line and over the Harmons’ kitchen table, has become a big, important piece of Tulsa Modern Movement’s rep. It’s always had its own life, and I’m eager to see how it grows next.

This time this year, I’m in the middle of several new projects for the 2014-2015 season. TuMM is starting off with a bang, touring to the {254} Dance Festival in Waco, Texas, in September and performing at Tulsa Ballet’s “Creations in Studio K” pre-shows on October 4 and 5. Over the summer we had the honor of learning two works by Rachel Bruce Johnson, a quartet called “Game of Risk,” which I’m in, and a solo called “Red” (to be performed by Katelyn Yeary), both of which we’ll show in Waco and at Studio K. I’ve written here before about the process of making work with Rachel, and having her set work on us has proven to be just as rich (because, well, the work is!). “Game of Risk” (originally created this past spring for Perpetual Motion in Oklahoma City) is an honest, unflinching look at partnership — not what it can be or what it shouldn’t be, but what it often is: a bit of a mess of good intentions gone awry, a clash of wills, an ever-shifting dance among courage, trust, and fear. Rachel’s work is thrilling to learn because it combines a lot of specificity and a lot of space, threading together small looks and gestures with big tough anchoring phrases. As a choreographer and coach she has what I think of as a very sensitive volume-control knob, so that a movement of the eyes can actually be “louder” than the pounding, dynamic floor work that comes shortly after it. Being in her work, watching her create and re-create in the moment, is always an awesome gift.

Fall is the “making” time of year for us at TuMM, and this fall I have the honor of creating the central work for our season-end show. It’s a creation that’s a re-creation of a re-creation … in other words, a diving down through several layers into something that’s existed for a long time, namely the story of the Frog Prince, or rather the ancient human problems and solutions which that story captures and teases out. Writer Amy Page and I have been cooking up this project for a year, and now it’s starting to come to life. The solo I made last season, “Envelope,” was in a way a prequel to this piece, which will be called “Brief Kingdom.” 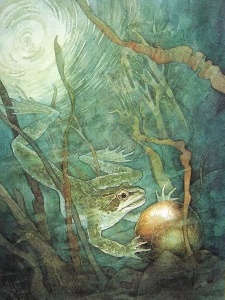 I envisioned “Envelope” (though it’s very open to other readings) as the story of what happened to the Prince before he was enchanted and changed into a frog. What was he like? What on earth happened to him? It can happen to anyone, I think, anyone who’s brave enough to open up to and experience the next phase in his or her own transformation. Sometimes we have to be “ugly” before we can be ourselves (and therefore beautiful). “Brief Kingdom,” in turn, is the Princess’s story, the Frog having done a large part of his own work already. Long ago Amy wrote a beautiful, rich poetic telling of this woman’s journey; now it gets to live in a new way, expanded into movement and theater. I’m very excited to share this work with you, in the making and once it’s made.

Finally, one more full-circle moment. Recently I started teaching at the ballet school where I grew up, the Jasinski Academy, formerly called the Tulsa School of Ballet. I teach the advanced classes and a variations class that’s especially close to my heart. When I was a student there, the late Ballet Russe de Monte Carlo dancers Moscelyne Larkin and Roman Jasinski, founders of Tulsa Ballet, coached us in classic variations from their repertoire — “Gaite Parisienne,” “Le Beau Danube,” “Les Sylphides.” I was taken from the start by the unique mix of glamour, passion, and spunky joie de vive in that era of ballet, an obsession that only grew stronger when Miss Larkin and Mr. J’s friends Frederic Franklin and Alexandra Danilova would visit the studio to work with the company, in which I was a teenaged apprentice. They all taught a certain brand of fearlessness, a go-for-it spirit that has never stopped inspiring me, as much as in daily life as in the studio and onstage. Now I get to share what they shared with me, in the very same rooms. We’re learning a variation from “Les Sylphides” right now, and I’m brought to tears watching these young ladies as they begin to feel — as a hundred years’ worth of dancers have felt — the resonance of Fokine’s choreography and Chopin’s music in their own 21st-century bodies, absolutely fresh and utterly eternal.

There’s nothing new. And what a gift that is. We get to discover it for ourselves; what’s new is how it comes through each of us.